Are there Cutteslowe Walls today? Yes, you bet there are.

“The Cutteslowe Walls in Oxford, built in 1934, were over two metres high and topped with lethal spikes.  They divided the City Council’s Cutteslowe estate from private housing to the west which was developed by Clive Saxton of the Urban Housing Company.

“Saxton, described as every inch a businessman, was afraid that his housing would not sell if so-called ‘slum’ dwellers were going to be neighbours, and the walls were built to separate them. ”

You might think all this nonsense was a thing of the past. But no, it is still part of modern housing development orthodoxy. There’s a good example just around the corner from me. 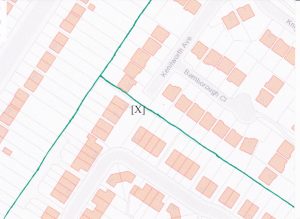 The map above shows three housing developments in the town. Their boundaries are shown in green. Top left is an avenue of council houses built in the 1930s (1), top right is a private estate built in the early 1990s (2), and at bottom the latest development built after 2009 on brownfield land (3). You can see they are examples of distinctly different types of urban planning.

A parish boundary enters at the bottom right  and exits at the top, with the town centre about a mile to the  south.

The houses in (1) are large semi-detached properties with long gardens running southwest to a ward boundary, those in (2) are medium size detached suburban properties, and those in (3) are modern two and three story urban properties. The green lines on the map are physical barriers, not breached by roads or footpaths. 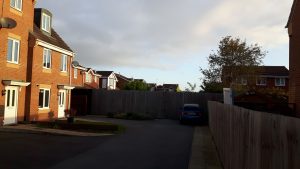 The photograph above is looking north from location [X] towards (2). 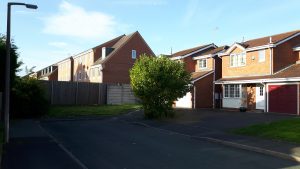 This photograph is looking south from (2) towards [X]. 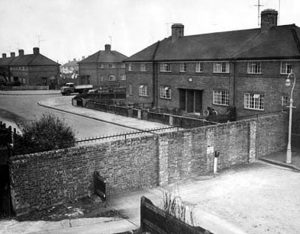 but a fence is as good as….

If you wanted to walk, cycle or drive from the fences south side to its north, you would face a 2½ mile detour.

To be fair, the estates are not separated by a wall which suggests it could be easily breached by a naughty schoolchild and, although sturdy, it does look a bit temporary. I imagine legal plans are in hand to remove the fence and create a safe cycle and foot path connecting the town to the urban – but ancient – village to the north.

I wonder how the “so-called ‘slum’ dwellers” will fare?