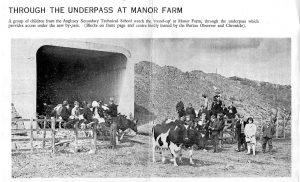 This curious photograph (click on all images to enlarge) appeared in the Burton Mail newspaper in the month Dad and I moved to the town: September 1966. It sets a group of local schoolchildren (and diary cows) against the background of the A38 bypass under construction.

Above is Branston in 1935 (Ordnance Survey). The A38 Exeter to Derby trunk road entered the village from the south west and left from the east.

Plans were made following the Second World War to improve the road, and for it to become a dual-carriageway between Streethay, north of Lichfield, and Littleover, south of Derby. This would include construction of a new road to bypass Burton. It would leave the A38 just south of Branston and skirt the town to the west.

The bypass under construction, 1967. The Gate Inn can be seen on the right, next to the original main road. The road included two narrow underpasses; one for pedestrian access along Tatenhill Lane, severed by the work, and another providing access to farmland from from Manor Farm – subject of the photograph at the top of the page. 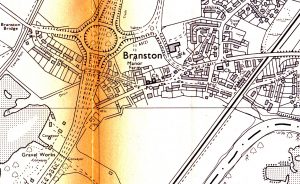 This map from 1990 shows the grade separated junction (GSJ), as built but with the addition of the later Parkway, running to the north.

A large area of land was compulsorily purchased for construction of the road, including two farms and the original primary school. A new school was built within its property to the north. Before Parkway was built in 1989, there was a nasty 90° bend in the approach road, that saw a few lorries plunge into the grounds of the Rykneld primary school below.

Now to the point of all this.

A few years ago the, frankly, user unfriendly little roundabout at the junction of the link road (B1058) and Parkway was replaced by traffic lights. This included widening the section of road from the new traffic lights to the A38 interchange from 4 lanes to five. The farmer’s underpass was filled in and sealed off. 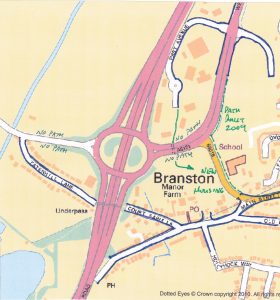 This situation is illustrated by the sketch map above. I’ve annotated the existing footpaths in blue and the pedestrian only extension from Parkway to the school gates as a green dashed line. Had the farm underpass not been backfilled, a new combined foot and cyclepath might have been constructed (at relatively little cost) from the south end of First Avenue to the new housing estate being built on the former fields of Manor Field. It would have provided a safe alternate route from Parkway to Branston village centre.